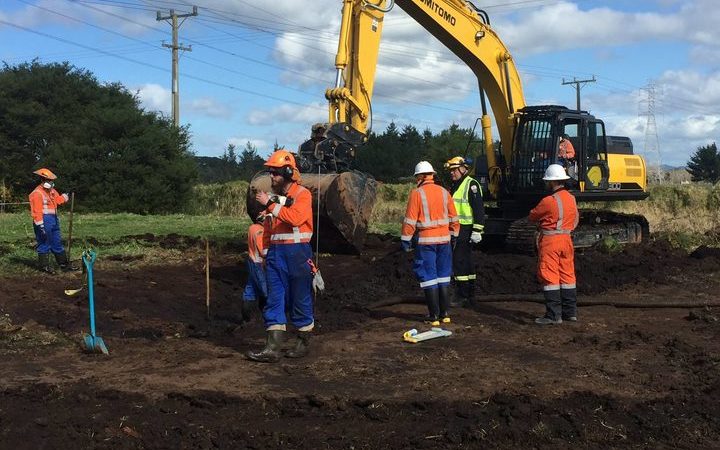 After being struck by a digger three years earlier, the crucial fuel pipe burst on a vacant property in Ruakaka in September 2017, leaking jet fuel into rural properties and creating a fuel shortage for 10 days.

Planes were grounded and flights cancelled, as airlines were forced to ration their fuel usage to 30 percent of their normal daily amount, while fuel companies transported petrol and diesel to stations with trucks.

A report by the government-commissioned inquiry into the leak has found the owner of the 170km pipeline, Refining New Zealand, maintained and operated it properly, but the jet fuel supply chain to Auckland International Airport was particularly fragile.

"With only a single supply chain for jet fuel, a single point of failure at any point along that chain can cause a complete disruption of supply to Auckland Airport," the report said.

"There is limited storage near the airport to provide cover for an outage and the number of days of cover that storage provides is decreasing as the daily demand for jet fuel grows. This means our vulnerability is increasing."

The report authors recommended the government enact a new law to allow it to intervene if fuel companies had not committed to investing more by the next June.

"[We] recommended that the government legislate to put in place a menu of regulatory options so that it can step in if the market participants are not able to make the needed decisions in a timely way."

It said the industry had not done enough preparation for such a supply chain incident, exacerbating the problem two years ago.

"The sector had to start from scratch in identifying and implementing solutions.

"They had to come up with ideas, work out what additional equipment or modifications were needed, get all parties involved to agree, find properly trained people, obtain regulatory approvals or waivers, test the equipment and procedures, and more, before they could start to operate.

"Much of this work could and should have been done in advance. This had not happened as part of the lack of robust sector-wide preparation, planning, and practice for a fuel supply problem."

It recommended a National National Fuel Emergency Plan be completed, and for the Ministry of Business, Innovation and Employment to take a stronger leadership role in the industry.

"It's a case of the fuel companies not working together to identify the forward forecast of jet fuel," she said. There was also a complicated arrangement of pipelines and storage sites, and decisions needed the unanimous agreement of the fuel companies, which meant changes took a long time.

Disruptions like that of 2017 had a significant impact on New Zealand's economy and reputation, so if the fuel companies didn't to anything the government needed to step in, she said.

Ms Trout said the inquiry suggested ways to protect the pipeline, which is "quite exposed" and through urban and rural land.

Refining NZ chief executive Mike Fuge said the inquiry was setting a challenge to industry and government to invest early and in the areas where it's needed.

"There is opportunity for a fresh industry approach where we get this critical infrastructure invested in, up and running, in a timely fashion."

Mr Fuge said the Refining NZ, which maintains and operates the pipeline, has increased monitoring and will follow up on the recommendation to do better on engaging with property owners and neighbours around the pipeline.

Pipeline most likely damaged by digger

The inquiry found "with reasonable certainty" that the pipeline damage was caused by a contractor looking for swamp kauri.

It established a 16-tonne digger was working on the Ruakaka property between 26 and 28 August 2014. The digger had been delivered there so a contractor could look for swamp kauri logs.

KRL does not look for or extract swamp kauri itself, but sometimes bought kauri logs from the contractor, the inquiry said. It it did not charge for the use of the digger or pay the contractor for his time.

The manager of KRL confirmed to the investigator that he arranged and paid for the digger's transport on each of the occasions it had visited the property.

The landowner gave the contractor permission to dig, but warned him not to dig in the back paddock, which contained the pipeline.

A neighbour saw the digger working in the area above the pipeline and tried to call the 0800 number to alert the monitoring service, but the call did not connect.

The report said it was more likely than not the contractor had realised he'd hit the pipeline.

The contractor put enough earth back in the hole that the pipeline and the damage to it was not visible, so the landowner was not aware that the pipe had been hit.

The inquiry report said: "The landowner told us that when he went to the property after the digger had gone, he was very angry at the way the land had been left. He said there were holes everywhere, which meant that it was not safe for his animals, and kauri stumps and logs had been left sitting there."

Two months later, the company that owned the digger brought it back again to carry out more repairs to the land.